It is the first of March 2013 finally… I will travel to Dallas for (one of) the best Oracle performance symposia in the world, Hotsos 2013. The flight to get there will be from Amsterdam to Philadelphia and from Philadelphia to Dallas. Against all odds I will not travel alone but an old Amis colleague and friend Marco Gralike with his colleague will be on the same flight (even going back). After departure from Schiphol at 13:00 in the afternoon, and having our stop in Philadelphia we arrive at the Omni Mandalay Hotel in Las Colinas (Irving / Dallas) at 22:30 local time… This is the real start of an awesome time at this great symposium… 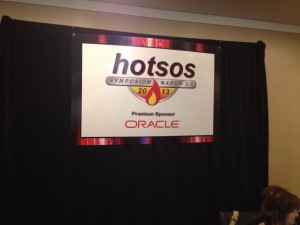 The weekend I work on my still not finished white paper what I have promised myself to release prior to my presentation at Tuesday 5 march… In the meanwhile I met and ate with old friends and it is great to meet so many of you again after a long time… At Sunday evening most of the attendees and speakers are in and including me, they collected their Hotsos batch…

To have something different than other years… I had Hotsos placed the text as shown instead of my old text saying “Mind the GAPP !!”. Based on the reactions and the fact that on a lot of stations I got free advertisement the best one would be the old one…

Anyway Monday morning Hotsos starts with as keynote speaker Tom Kyte… At such moments I remember how each start of Hotsos is a very special event, and how this 2013 one can be extra special due to the big amount of Dutch speakers. Toon Koppelaars even proposed to Hotsos to create a special Dutch track next time… As some of the other speakers mentioned… we were part of the Dutch invasion this time, consisting of Toon Koppelaars, Frits Hoogland, Marco Gralike, Jacco Landlust and myself…

Every start of Hotsos makes you remind about the ones you did attend before and how the current symposium will give you new ideas and new knowledge. Hotsos is special due to its limited amount of just two tracks and the level of the presentations. The presentations are most of the time of deep technical level and are not sales oriented, so you hear the real story, the story that can help you do a better job… 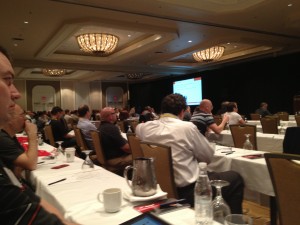 Tom Kyte and all the Hotsos 2013 attendees

After the keynote, Tom Kyte gave a presentation called “Five Things You Want to Know “Go Faster” “. The important things I got from it are:

After the presentation the hall was split-up for the two tracks and the track I followed started with the first Dutch speaker Marco Gralike… Marco presented on of course XML-DB (see: http://www.liberidu.com/blog/2013/03/05/hotsos-2013-presentation-creating-structure-in-unstructured-data/). In the presentation Marco mentioned some XML-DB 12c features and syntaxes, which made the presentation extra refreshing. 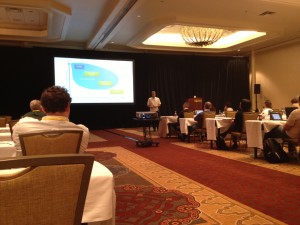 At 12:00 noon we had lunch and at such times it is awesome to connect with new people and talk with old friends… I am sure this is one of the most important reasons it is so important to go to conferences in the first place. Learn something, bring something and make connections with people.

At 13:00 I went to a presentation of Cary Millsap, which is titled “Performance is a Feature: Here Is the Specification”. As usual Cary gave a mind tickling presentation and for me the highlights were: 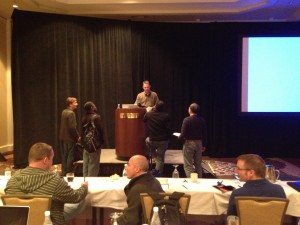 Cary Millsap getting questions after his presentation at Hotsos 2013

After Cary I attended the presentation from Alex Gorbachev called “Data Science for the Oracle DBA”. The presentation of Alex started with the story of the gift Cary gave to Alex, and due to this Alex asked Cary to come forward. At this point Alex gave Cary a wooden device to build histograms. To get a bit of the funny situation you can find a small movie below of the actual event. 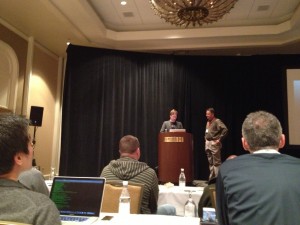 After the gift to Cary, Alex carried on with his presentation. In his presentation he talked about mean vs. median and some other useful statistical terminologies (see also the free courses on Http://Coursera.org). Further more he showed demos of Project-R visualization and Oracle Data Mining (ODM). I personal was surprised to see Alex doing some demoing on ODM. As you probably know I am using ODM inside Method-GAPP for Oracle oriented systems. It was really nice to see other people starting to see the great power of this Oracle software. I will try to post in the near future some post on Project-R used with Method-GAPP. 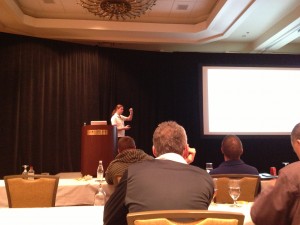 In general I want to give compliments to Frits for his very in-depth presentation. It showed very good what is really happening and it gives a lot of ideas to think about. For me it was also nice to remember the old days when I was working for Oracle and I had to solve problems by using truss, strace, etc. like tools. 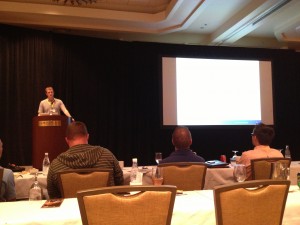 At 18:00 the first Hotsos day was finished… a lot of information to deal with, but a satisfied feeling to be part of such a great day and able to see and hear the information from the first hand.

After a quick drink and having some food I went to my hotel room (the 27th floor)…. enjoyed the view… 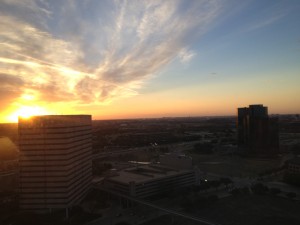 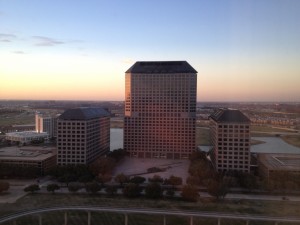 …and started working on my white paper again, the next day I would present my own presentation called “”Method GAPP” Used to Mine OEM 12c Repository and AWR Data”…