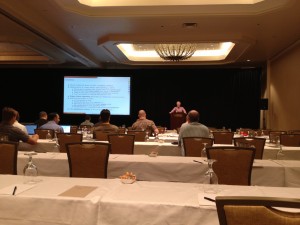 After the presentation from Neil it was my turn to give my own presentation as I mentioned earlier, titled “”Method GAPP” Used to Mine OEM 12c Repository and AWR Data”. In my presentation I showed how Method-GAPP could use data from the Oracle Enterprise Manager 12c Repository to find out bottlenecks in your end-user process response times. OEM is most of the time very centrally placed in the system and so the repository contains almost all the input you need to use the method. In the method it is important to have your data synchronized at timestamps and basically this job is done for you by using the data from the OEM repository. In most of the Method-GAPP projects I have been the data collection and synchronization steps from the method took the most time, so by have this done by OEM you can gain a lot of valuable time in this kind of projects. Next to the usage of OEM I gave examples of the power of the method by making factorial analyses of AWR, SQL-statement response time data and AWR, event data. In the graph below is shown what Method-GAPP in base can do with the primary components, as defined in the method, in a very simplified way. 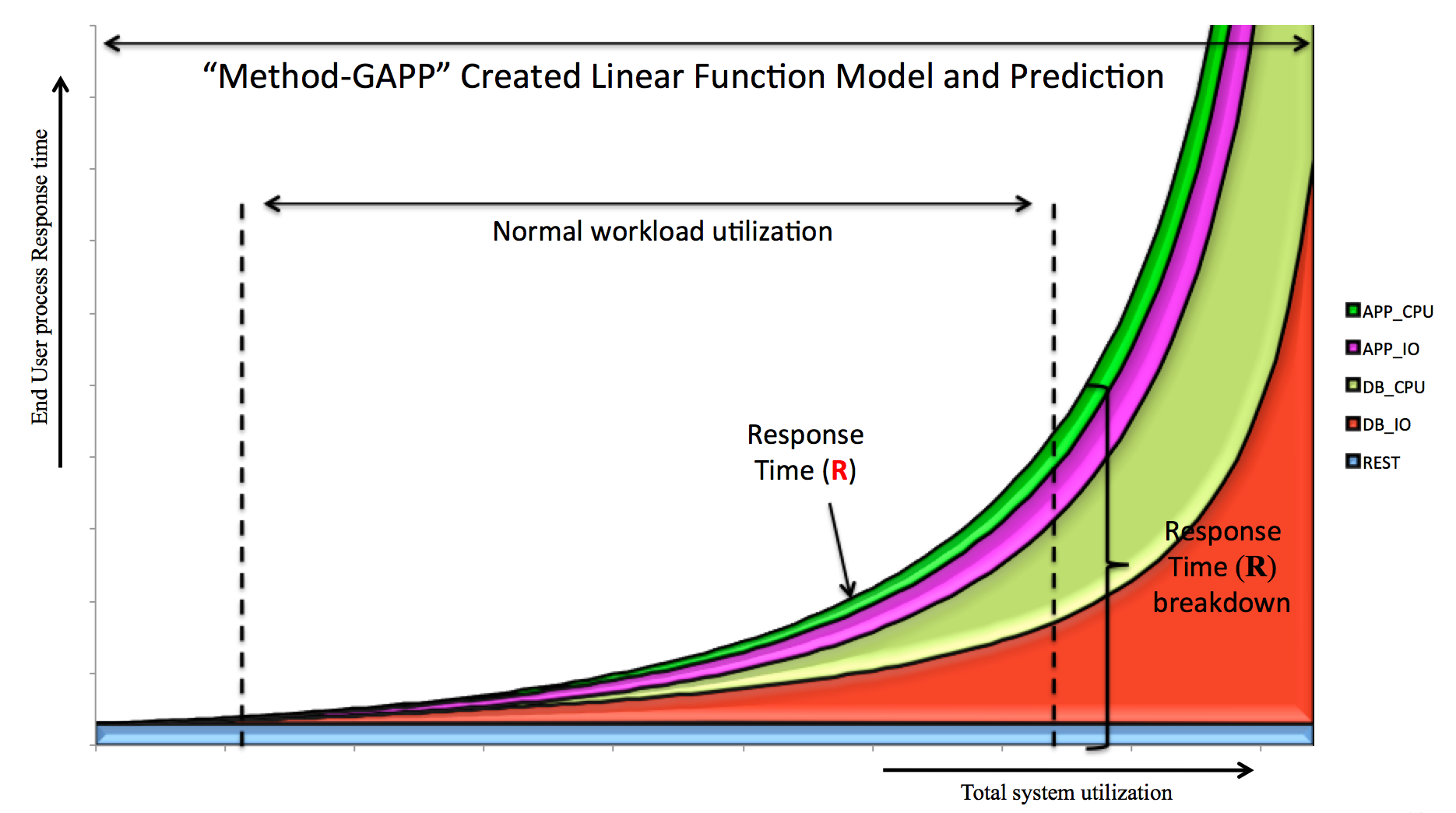 Next to this Method-GAPP can use secondary components, as defined in the method, to find for example which SQL is involved in causing biggest amount of variance in the end user response time (as Cary said the variance is much more important as the mean). The picture below shows how the factorial analyses to explain the response time of “Warehouse Query”, which was using data of a test when different transactions where running are compared with the Top Activity SQL when a test was done with only the “Warehouse Query” running. 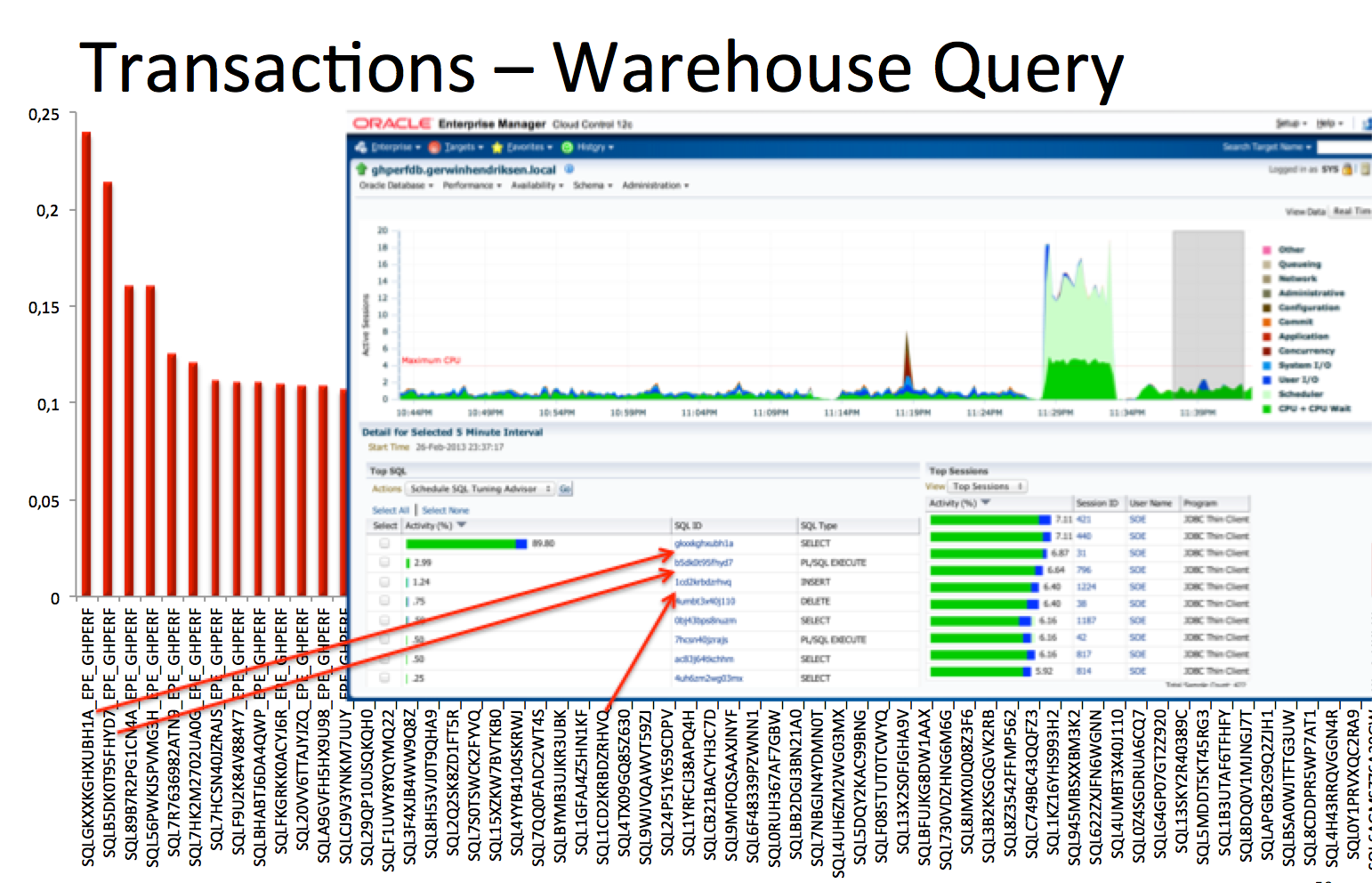 At the end of the presentation I got several questions from the audience locally present and from the audience remotely present. One of the questions I got a lot of times is what to use to get your end-user response time measurement. One of the tools I have seen to be very helpful with this is Oracle Real User Experience Insight (RUEI). The newest version has a very good integration with OEM 12c, what makes it even better to be used in Method-GAPP.

Based on the reactions I got from the audience and the people I spoke afterwards, like Neil Gunther and Cary Millsap, and of course my own feeling, I guess the presentation just contained too much information for one hour to explain the whole method in this detailed way. In the future I will break down my presentation into smaller presentations to only deal with a part of the whole method and be able to explain the steps in higher detail. The presentation can be found here, and the new white paper can be found here.

To get more information on the “Metric Extensions”, see also the Oracle documentation: http://docs.oracle.com/cd/E25178_01/doc.1111/e24473/metric_extension.htm#autoId0

After attending the presentation from Kellyn I attended the presentation from Kyle Hailey with his presentation titled “Database Virtualization Comes of Age”. In this presentation Kyle talked about Database Virtualization, which is a technology to reduce the amount of storage for (virtual) copies of the database. It basically only stores the original database and the changed blocks in comparison of the original database. In lots of organizations a lot of copies of the production database exist for test purposes. The database virtualization concept is basically used to help in this kind of situations. Kyle showed that CloneDB is a very cool tool to use, you can read more about it at: http://www.oracle-base.com/articles/11g/clonedb-11gr2.php 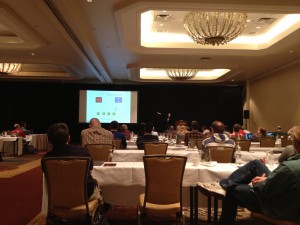 After this long second day I had a nice talk with Kyle Hailey, Neil Gunther and Karl Arao. Karl explained about his extensive testing on some big systems. It was great to see that Karl gathered so much data from different systems, including Exadata systems. You can read more about it in the blog post “cores vs threads, v2 vs x2” at http://karlarao.tiddlyspot.com 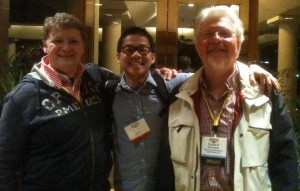 For the dinner that evening I was invited by Neil to join him for Japanese. The dinner was great and we had a good chance to catch up with each other again as old friends (Thanks again Neil for the invitation!).

After having dinner we peeked in into the on going party from Hotsos. Hotsos organized this time a kind of retro evening with all kinds of games. After the party we had with several other speakers a drink. It is always fun to be able to have fun and great discussion in the field with so many of you…